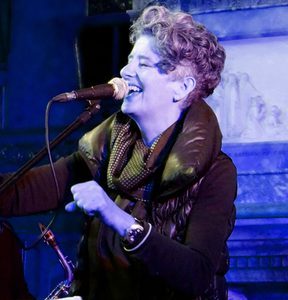 Expect swinging jazz, upbeat melody and haunting jazzy vocals in this collaborative lineup, created especially for BJF2019. Two years ago, our ‘Celtic Jazz’ concert very nearly stole the show of the whole Festival, finishing in rousing and emotional form at the Muse. So memorable was it, that we have decided to re-create the quartet – two from Ireland, two from Wales, and a mix of cultures, histories and influences in between – but in a larger venue (Wellington Hotel), for our Finale concert. Put the sophisticated smokey jazz of the Irish duo together with the melodic virtuosity and sensitive jazz of the Welsh team and you’ll get the idea. Don’t miss it!

Bringing the jazz and spirit of Ireland: ‘Zrazy’

Musically sophisticated and lyrically smart, Carole Nelson and Maria Walsh perform in Ireland and elsewhere as the ‘Zrazy’ duo, where they inhabit a unique place in Irish contemporary music. They are also a much garlanded song-writing team with a lengthy and critically acclaimed creative partnership that has recorded six albums. They have toured much of the world with their music and have won an array of awards globally. Carole Nelson is also a highly creative jazz composer and performer in her own right. Together, it is a special amalgamation of Jazz, Latin and Celtic folk influences – with a bit of blues, soul and other styles – that they perform and which have continued to radiate positivity and accumulate accolades throughout their 20 year career.

Maria is a jazz, pop and classical vocalist as well as percussionist, flautist, teacher and producer with over twenty years experience both performing as as a recording artist. Her original background was in classical piano, flute, classical voice, but she later studied contemporary voice with Richard Armstrong (USA), Kevin Crawford (Ireland, Italy), Meredith Monk (USA) and Tony Norton (Ireland) and is now completely at home in the styles of jazz and swing music. Maria is the lead singer and record producer with Zrazy (formed in 1991 with pianist Carole Nelson). Together they have performed worldwide – New York, Berlin, Paris, San Francisco, LA, Zurich to name just some of the cities they have played. At home, Maria also performs with other lineups including on percussion and as a session vocalist with Henry McCullagh band (ex Paul McCartney’s “Wings”), and has worked as voice coach to the lead singer, Brittany Woodrow, in ‘Fame’ the UK Musical, prior to its run in Dublin in 2010. Their five CDs as Zrazy and the high quality of their music (Barry Egan, Irish Independent), have drawn highly positive reviews and praise from reviews and fans alike, and have also received both national and international awards. 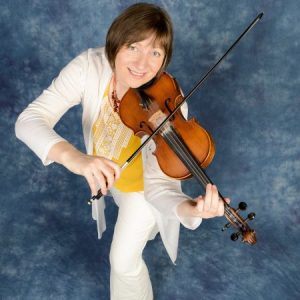 Heulwen  is a renowned Welsh jazz violinist, who is equally at home in the genres of folk, blues or classical violin. She has played in many highly regarded ensembles, from Donnie Joe’s American Swing to performing with visiting musicians and jazz guitarists such as, Will Barnes, Jean Guyomarc’h and Gui Tavares. A seasoned collaborator, Heulwen has specialised to some extent in ‘gypsy jazz’ and ‘hot club’ style music, and is highly acclaimed for her work in this area, from duos with jazz harpist Ben Creighton Griffiths, bassist Ashley John Long and others, to appearing with the outstanding Remi Harris Quartet in concert. Based in Cardiff and with Welsh as her first language, Heulwen is also fluent in the music of traditional Wales, its folk and celtic themes. She brings this knowledge and intuition to her violin playing and music, which adds to the amazing artistry of her playing. Loved by audiences, near and far, Heulwen brings humour, humanity and a strong rapport with those around her, making any concert or gig a truly memorable and enjoyable audience experience

Carole has been living in Ireland since 1986 and has earned a prominent and respected place there on the jazz and music scene. She works with many of Ireland’s top jazz vocalists and musicians in both Dublin and the South East, also performing a weekly set with the Hot 4 Quartet and music from Ellington, Sinatra, Nina Simone, Ella Fitzgerald, Stevie Wonder and accompanied by swing dancers. She cites pianist Bill Evans as her major musical influence, but also enjoys early sacred music too: she composes for choirs as well as instrumental ensembles and teaches voice as well as sax and piano. Her working musical life spans four decades. In the late seventies she performed in London with Carole Grimes, Jan Ponsford and Maggie Nichols, all highly regarded UK Jazz and blues singers. Her own band, The Spoilsports, released an EP in 1980 described by NME as “a cross between Steely Dan and The Joy Of Cooking”. Her move from London to Dublin in 1986 saw Carole participating fully in Irish musical life, as both saxophonist and pianist, performing with Major to Minor, Kieron Halpin, Honor Heffernan and many more.  She formed Zrazy with vocalist Maria Walsh in 1991. Their debut LP ‘Give it All Up’ won the 1992 Hot Press Magazine Music Critics Best New Band Award. Carole performed with Jean Toussaint at the Derry Jazz Festival in 2016, and with Zrazy at the Cork Jazz Festival; they have toured extensively in North America and Europe. Her latest project, the Carole Nelson Trio, with Carole on piano, bassist Cormac O’Brien and drummer Dominic Mullen, began at the 2015 Dublin Trio Trio Trio Piano Festival. The Trio’s first album, One Day in Winter was released in November 2017. The album, all original compositions from Carole, follows the course of a winter’s day, inspired by the South County Carlow landscape between the River Barrow and the Blackstairs Mountains, where she currently lives.

Ian Cooper – guitar, double bass
Ian is a busy and very highly regarded local musician and educator, playing bass and guitar in a range of folk, blues, pop, jazz and world music groups. Ian is Musical Director of ‘Uskulele’, a Ukulele ensemble he established in 2013, which has over 50 active players in several thriving groups. He is an active teacher and musical educator around the region, with a wealth of experience gained from studying, performing and promoting music in both Wales and London. Prior to moving to Wales, and following his degree in Performing Arts at Leicester Polytechnic, Ian managed the Grand Union Jazz Orchestra in London. He took a PGCE at the University of Wales and has been at the heart of community music ever since, performing and teaching – including at Brecon Jazz and Fringe Festivals. With Rachel Cooper, he runs ‘In Time for Swing’, a café jazz style sextet, is a member of ‘Blue Haze’ jazz quartet, and regularly performs with visiting international jazz artists. 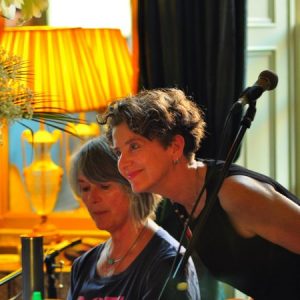 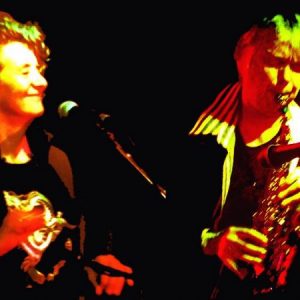 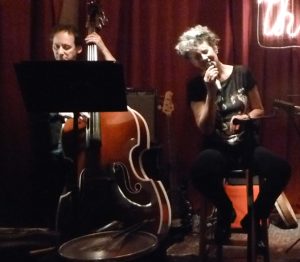