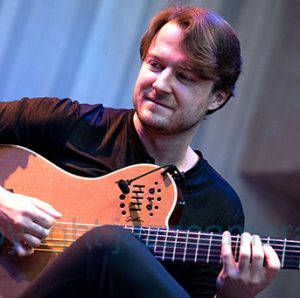 Maciek Pysz is a jazz musician, guitarist and composer who is well known for his clear lyrical phrasing, his virtuosity and imaginative, cinematic compositions. These are inspired by people, places and experiences. Born in Poland, Maciek tours and collaborates with musicians across Europe; he has also lived in Paris and London, where he appears regularly at top jazz spots. These collaborations, his travels and cultural experiences have led to many compositions and in particular, his acclaimed albums: A Journey / Coming Home / Insight / Discoveries.  Maciek Pysz has performed for Brecon jazz club audiences previously, and is much admired for his modesty, virtuoso playing and for his friendly audience interaction. 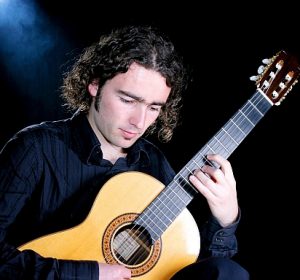 Gerard Cousins is a rare guitar player, equally at home rearranging avant-garde works, crafting his own compelling pieces or branching out in unexpected directions… including here his facination with the sounds of Jazz.

“Cousins has reached a rarefied point where his stunning playing is matched by his artistic vision” Acoustic magazine.

Paula Gardiner is a highly distinguished jazz musician, arranger and composer who comes from a family of musicians in Wales. Whilst she is best known for her work on the double bass, she first began playing guitar. After graduating from the Royal Welsh College of Music & Drama, she worked for S4C television as well as in theatre and film music in Wales. Only much later did Paula take up the double bass, which she played for seven years in an Afro-Cuban band. As a bassist, Paula has played, toured, collaborated and recorded with many jazz names, performing regularly with saxophonist Lee Gooall and drummer Mark O’Connor. She joined the Dave Stapleton Quintet on The Life Was In Black And White (2005), The House Always Wins (2007), Catching Sunlight (2008) and Between the Lines (2009). Today, Paula leads the renowned department of jazz and Welsh folk music at the Royal Welsh College of Music & Drama in Cardiff.  Paula is also honorary chairman of the Women in Jazz organization in Swansea; in 2012 she received a nomination for the Parliamentary Jazz Award for Education.

Use our Ticket Link to pre-book – no booking fees.
Discount Cards & Membership – via our online box office CLICK_HERE.
WE ARE GRATEFUL FOR SUPPORT OF THIS EVENT BY ARTS COUNCIL WALES