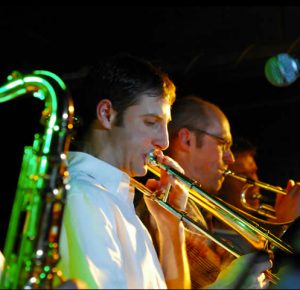 Trombonist Gareth Roberts is one of the most admired and familiar musicians on the South Wales jazz scene. Originally from Aberystwyth, the Cardiff-based Roberts leads his own groups as well as being an increasingly significant playing as well as composing presence in the ranks of long running cult favourites, the Heavy Quartet. Gareth is a distinguished leader of the Monmouth community Big Band, where he recently launched a series of concerts whose commission was based on his own Welsh-language and themed jazz compositions. 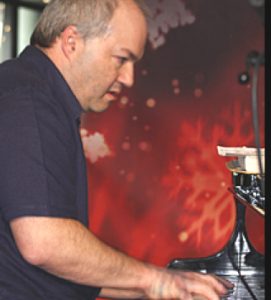 The versatile Roberts is also one of the principal soloists in the Capitol City Jazz Orchestra and has also played with the Latin-esque Buena Risca Social Club. He is an in-demand sideman and session musician who also has a parallel career as a school teacher and music educator. Other members of the quartet, Dave Jones, Ashley John Long and Mark O’Connor, are similarly distinguished soloists – virtuoso musicians on the UK and Welsh scene, appearing regularly in or leading their own top class lineups and performing widely including on European tours.

What they say:
“This [Ellingtom Set] is a superb piece from four local heroes who genuinely deserve to be more widely known. These musicians brought a real freshness and vitality to Ellington’s music”.
Jazzmann Review 11/07/2017

GRQ: Other members of the Gareth Roberts ‘Ellington’ quartet, Dave Jones, Ashley John Long and Mark O’Connor, are similarly distinguished soloists – virtuoso musicians on the UK and Welsh scene, appearing regularly in or leading their own top class lineups and performing widely including on European tours:-

Dave Jones: one of the most admired jazz composers and performers around and a prolific collaborator with other musicians in Wales, UK and wider. Following initial musical training at Cambridge University, Dave was inspired by tuition in jazz piano and harmony with Lionel Grigson at one of the first Guildhall jazz summer schools. He soon embarked on a musical career, initially involving recording sessions at Maida Vale Studios in London for BBC Radio 2 programmes hosted by Dave Gelly (jazz critic, author) and Digby Fairweather (jazz cornetist, author).

Ashley John Long (pictured below) is a virtuoso double bassist and composer active in a diverse range of musical idioms including Jazz and Improvisation, Session Music, Early and Contemporary Chamber Music, and as a Soloist. Since graduating from the RWCMD in 2008 he has maintained a busy and varied freelance career which has encompassed many strands.  A virtuoso improviser, Ashley has developed a unique approach to the instrument, creating innovative new performance techniques including methods of preparing the bass, and he has performed and recorded with some of the genre’s leading players and released a solo disc Psi on FMR in 2017.

Mark O’Connor (pictured below) from Hengoed, is one of the most in-demand drummers in Wales. He works regularly with numerous different projects and bands: Duski, Burum, Paula Gardiner Trio, Wonderbrass and Olion Byw, to name a few. Mark is an active teacher in the community, helping to lead both Caerphilly Samba, and Wonderbrass, a leading community jazz band from South Wales, as well as being one of the visiting drum tutors at the Royal College of Music and Drama, Cardiff.

Mark has toured Internationally playing at the Rochester Jazz Festival, USA with the Paula Gardiner Trio and Huw Warren (2009), The Smithsonian Folklife Festival with Burum in Washington DC (2009), and touring China in 2013 with Tina May, Iain Ballamy, Paula Gardiner and Huw Warren being particular highlights. Mark also has a passionate interest in the musics of Brazil and Cuba in particular.

Event included for holders of a Jazz Weekend Tickets and Day Passes. Use our Ticket Link to pre-book – no booking fees.
Discount Cards & Membership – via our online box office CLICK_HERE. 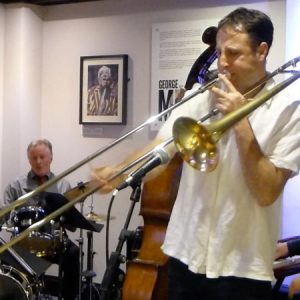 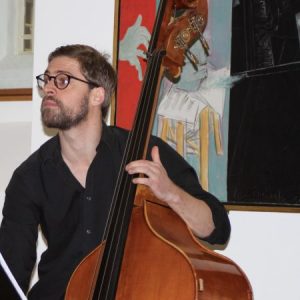